Long waits at the border? Get finger-printed or iris-scanned and receive an easy-pass NEXUS card! Don't want your driver's license super-charged to a national identity REAL ID card? OK, but the Vermont DMV will take your Vermont driver's license and hand you back a Vermont Privilege Card! They say it's the same thing, but try using it to rent a car. 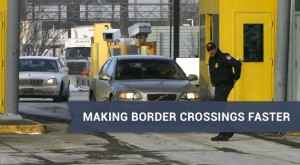 Americans are being pushed, pulled, and towed into turning over to government increasing amounts of highly personal information.

We get it -- highly personal information is what’s needed for convenient, positive ID of someone.

But if the problem is long lines at the Highgate Springs or Derby Line crossings, asking people to turn over highly personal information is not the answer. The answer is to add Border Patrol agents.

And if the federal government wants to institute a national identity card, phasing out state driver’s licenses isn’t the answer. The answer is to have a robust national debate about whether Americans really think it’s OK to be told you have to turn over official papers documenting you are who you say you are – rather than simply producing a license that says you’re capable of driving and can I please be on my way?

Increasingly, government is using the same strategy that private companies have long used to get us to turn over personal information – we’re asked to trade our privacy for convenience. That’s the basis of Web marketing, and it’s been highly successful. Marketing companies now know more about our private lives than we can probably remember – because we want free e-mail, arm-chair hotel-bookings, and no-hassle airfare comparisons.

It adds up to this: With the NEXUS card, you can avoid all those long lines at the border or at airports – as long as you’re willing to undergo background checks, which include gathering biometric information from you such as a fingerprint and a scan of your iris. You also have to be interviewed by federal agents.

Sen. Bernie Sanders is pushing the NEXUS program as one solution to those long lines. Special interview sessions have been set up around northern Vermont to help you get your special clearance.

Convenient? You bet. But remember the price.

It’s a great deal for the government. They get more information about you, and they don’t have to hire more Border Patrol agents.

If you're curious -- link to NEXUS application.