When news stories appeared in 2006 alleging phone companies were turning over customer call records to the NSA, the ACLU-VT decided to find out if this was happening in Vermont. Our inquiry before the state Public Service Board was stopped by the federal government -- on state secrets grounds. In 2013 Edward Snowden confirmed bulk collection of Americans' phone records was happening. Now it will stop. Pro-surveillance hawks caved this week during a late-night Senate session in the U.S. Capitol after realizing they didn't have the votes to keep the Patriot Act intact. 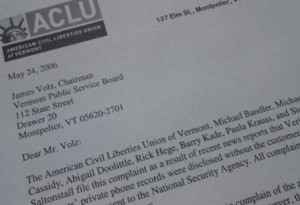 The ACLU-VT's complaint of NSA mass surveillance filed before the state PSB in 2006.

In fact, the hawks let the law temporarily expire because they wouldn’t agree to reforms the House insisted be made.

But the tide had turned. Reforms made through the USA Freedom Act, championed by Vermont Sen. Patrick Leahy, were reluctantly accepted. The USA Freedom Act passed both chambers and was signed into law by President Obama.

The reforms were not everything that the ACLU wanted. But this spring’s action was the first time since Jimmy Carter was president that the power of U.S. intelligence authorities was clipped. (Gas sold for 63 cents a gallon then.)

Instead of the post-9/11 panic that shepherded in the Patriot Act, Congress and the public appear ready to return to an era of restrained government surveillance where privacy and national security interests are better balanced.

The major reform in the new law is the NSA can no longer engage in bulk collection of information about all Americans, information such as phone records. The NSA (or other agencies) must now apply to the Foreign Intelligence Surveillance (FISA) court for a warrant authorizing access to specific records.

Only in limited circumstances will broad, dragnet-style sweeps be allowed. And the phone records will be retained by the phone companies – not vacuumed up and stored in huge NSA databases.

The reforms are a vindication for Edward Snowden, whose revelations of U.S. surveillance of its own citizens prompted the removal of intelligence agencies’ blank check for spying.

In an op-ed carried by The New York Times, Snowden wrote, “Privately, there were moments when I worried that we might have put our privileged lives at risk for nothing — that the public would react with indifference, or practiced cynicism, to the revelations. Never have I been so grateful to have been so wrong.”

Snowden told the ACLU, which has been working with him, “Though we have come a long way, the right to privacy remains under attack.”

Earlier, in May, the 2nd U.S. Circuit Court of Appeals had ruled the NSA’s bulk collection of phone records was illegal because it hadn’t been authorized by federal law.

The court wrote it was hard to discern congressional intent in the case – a major reason being the program had been shrouded in secrecy. It cannot “reasonably be said,” the court wrote, that Congress approved “a program of which many members of Congress – and all members of the public – were not aware.”