Constitution Day is this week. It was on Sept. 17 in 1787 that the delegates to the Constitutional Convention in Philadelphia wrapped up their work and put their signatures to the document they had been working on for four months. In 2004 Congress officially designated Sept. 17 as Constitution Day, a day to celebrate the federal form of government established in that document and the individual rights attached to it in the Bill of Rights, added in 1791 as the first 10 amendments. But there's a second constitution we should celebrate, too, and that's the Vermont Constitution. The cause for celebration is not just because it's our own state's constitution but because in some cases, the Vermont Constitution provides better protection of personal rights than the U.S. Constitution. 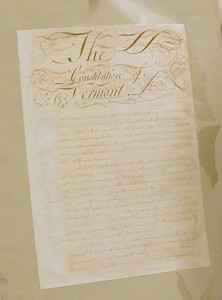 It’s Chapter 1 of our constitution, the section called “A Declaration of the Rights of the Inhabitants of the State of Vermont,” where these broader protections are found. The “Declaration” pre-dates the federal Bill of Rights (the first 10 amendments added to the U.S. Constitution) by more than 20 years. It was modeled on (in fact, it was largely copied from) the “Declaration of Rights” in the first Pennsylvania constitution, adopted in 1776. The first Pennsylvania constitution is often considered the young country’s most democratic. Unfortunately (for Pennsylvanians) it was largely rewritten in 1790, while Vermont’s “Declaration” has basically remained unchanged since its adoption in 1777.

Among the greater protections in the Vermont Constitution:

• Search and seizure. Article 11 has been interpreted to require a warrant in more situations than the U.S. Constitution’s Fourth Amendment. For example, not only can your car not be searched without a warrant (true under the Fourth Amendment, too), but any closed container or area (like the glove box) is also protected against warrantless searches (not true under the Fourth Amendment). Also, you can’t be ordered out of your car during a roadside stop (unless you represent a physical threat or a crime is taking place within your car).

• Separation of church and state. Article 3 is much more detailed than the “establishment clause” of the First Amendment. Prayers before Vermont town meetings have been ruled unconstitutional based on the prohibitions against “compelled worship” in Article 3. The U.S. Supreme Court recently ruled that such prayers are permissible under the U.S. Constitution.

These protections aren’t just academic. As recently as this past June the greater protections of the Vermont Constitution were demonstrated when the Vermont Supreme Court overturned a mandatory DNA collection law. The legislature wanted anyone arraigned for a felony, not just those defendants convicted, to be forced to give a DNA sample. The Supreme Court said that went too far. Article 11 provides “heightened standards and requirements,” the court ruled. A warrant is needed to take someone’s DNA; the warrant requirement can’t be ignored simply because it’s easier for police and prosecutors to do so, the court said.

And in 2012, a Vermont Superior Court judge ordered the town of Franklin to stop beginning its annual meeting with a Christian prayer. Article 3 guarantees that “that no person ought to, or of right can be compelled to attend any religious worship,” the court said.

The rights asserted by the plaintiffs in both of these cases would likely not have prevailed under current courts’ interpretation of the U.S. Constitution. DNA can be collected without a warrant or the person’s consent, and prayers are allowed at public meetings, the U.S. Supreme Court has recently said.

We Stand with Standing Rock