Since 1999, seven Vermont police agencies have applied to the federal Department of Defense's used military equipment giveaway program to obtain sniper rifles. The St. Johnsbury PD asked for a pair to watch over the town of 7,000. The Orange County sheriff's department also asked for two (the county's population is 29,000, which raises the question of what goes on in St. J. that doesn't go on in Orange County). And the PD in the Chittenden County suburb of Shelburne similarly asked for a pair. Shelburne is the image of peacefulness, with few or no known outbreaks of long-range combat (although the town does have, according to its application, approximately "4,000 tourists in during the season not counting camp residents"). The Lamoille County sheriff's department asked for two sniper rifles, and Brattleboro did, too -- along with 15 M-16 automatic assault rifles.

The biggest sniper rifle request, however, came from within the state's Department of Fish and Wildlife. In 1999, some staff wanted to ask the feds for 10 sniper rifles. Ronald Regan, then-commissioner of the department, apparently shot down his inferiors' shopping spree, though, nixing the sniper rifles and approving a cut-down request for M-14 rifles that "are not Rambo-looking."

There is a tiny bright spot among these deadly firearm aspirations. After receiving its M-16 rifles (and night vision goggles), Brattleboro asked the feds if it could return the equipment -- the town hadn't found much use for them. 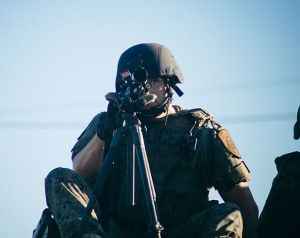 This summer, Americans were shocked by the images of police in Ferguson, Missouri, draped with and surrounded by cast-off military weaponry obtained as part of a Defense Department program known as the 1033 surplus disposition program. Many people were particularly stunned by the sight of police sitting atop armored trucks, pointing sniper rifles at the very taxpayers they are paid to serve.

But military hardware is not a new phenomenon in Vermont. Although the state has just 620,000 residents and ranks 48th in per-capita violent crime, state and local law enforcement agencies have been asking the federal government for sniper rifles and a lot of other weapons of war since 1998.

That’s surprised a lot of Vermonters. Few people had any idea of the amount of military materiel coming into the state. Because the items are largely free (ignoring, of course, the amount U.S. taxpayers originally paid to produce the weapons and other goods for the military), the items never showed up on local or state budget sheets – the place where details of acquisitions can usually be found.

Vermont journalists have been digging deep into data that details what Vermont police have been requesting and receiving through the federal 1033 program. (Check out stories done by VTDigger, WPTZ, and Hill Country Observer.) We've posted that data on our Web site in text-searchable PDFs, sorted by municipality or state agency. Want all of the data to do your own analysis? We've rolled all of the files into a tarball [480MB] (or Zip [481MB]) for your convenience.

Over the next few days, we’ll be blogging about some of the things we’ve found in looking through the data files. Vermont police departments’ desire for sniper rifles is just a sliver of the military hardware that officers have been shopping for. You might be surprised at what your local department has on hand to patrol your streets and keep the peace.

Oh, did we mention that Williston asked for an M-21 rifle?