Are No-Knock Raids Ever A Good Idea?

As has been well-covered by Vermont media, on Dec. 22nd a Burlington man and alleged drug dealer was killed by Drug Enforcement Agency (DEA) and Vermont State Police (VSP) officers. The DEA, VSP, and other members of the Vermont Drug Task Force executed a so-called "no-knock" warrant at the home of the alleged dealer, Kenneth Stephens, in a densely populated residential neighborhood two blocks from the federal courthouse. Officers with the agencies involved said Stephens aimed a muzzleloader at them before he was shot. As stated in the federal warrant request and criminal complaint, the officers were aware of the presence of the muzzleloader before going in but did not know whether it would be loaded and ready to fire. 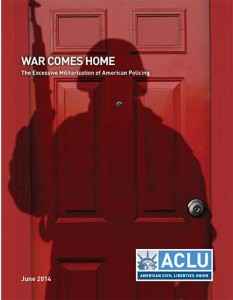 Burlington’s mayor, city council, and community members have questioned the shooting because several of the 13 shots fired by officers exited the house and nearly killed a neighbor. The law enforcement tactics constituted “police violence,” some community members charged. (To review news coverage of the incident, see here, here, here, and here.)

Militarized police tactics, such as no-knock SWAT-style raids, have become all too common in communities where the “War on Drugs” is being waged. In June 2014, the National ACLU released a report entitled The War Comes Home that details the increase in American police use of combat-style tactics to serve search warrants on suspected drug dealers. The report, sadly, concludes that the use of militarized tactics frequently “results in tragedy for civilians and police officers, escalates the risk of needless violence, destroys property, and undermines individual liberties.”

The report looks at a number of no-knock raids over the last decade that resulted in needless death and injury. For example, in a horrific 2014 incident, a drug raid pursuant to a no-knock warrant resulted in the burning and maiming of a toddler when a flash grenade was accidentally thrown into his crib. The person being pursued was not in the home at the time.

The legality of no-knock searches and warrants has been a point of controversy over the last two decades. The Fourth Amendment to the U.S. Constitution generally requires that police have a warrant before they can enter and search a person’s home. Officers must announce their presence, give the occupant reasonable time to come to the door, and provide the occupant a copy of the warrant before they can demand entry to conduct a search.   This “knock-and-announce” rule is codified in federal statute.

However, in Richards v. Wisconsin (1997) and Hudson v. Michigan (2006), the U.S. Supreme Court allowed police to obtain no-knock warrants ahead of a search or forgo the knock-and-announce rule if they had “reasonable suspicion” that circumstances presented a threat of physical violence or the destruction of evidence. Reasonable suspicion, a notoriously malleable standard, is based on the totality of available facts in connection with rational inferences from those facts.

Not only did these Supreme Court decisions permit no-knock searches, they also allowed the introduction of evidence at trial when it was found after an unlawful no-knock entry. Effectively, the high court removed one of the most important deterrents to unannounced forced entry into homes by law enforcement.

State legislatures and state courts have the authority to maintain greater search and seizure protections by requiring state and local law enforcement officers to always “knock-and-announce” unless immediately exigent circumstances exist. Many states have laws on the books regarding the knock-and-announce rule. And, for instance, in People v. Wright (a pre-Hudson case), the Illinois Supreme Court upheld the suppression of evidence based on a no-knock warrant. The Court said that the knowledge of firearms and drugs in the home did not shed light on the particular defendant’s propensity for violence or a likelihood that the defendant would destroy evidence. Therefore, an officer could not have had reasonable suspicion that an announced entry would be dangerous or lead to the destruction of evidence.

Vermont does not have a knock-and-announce law, and the Vermont Supreme Court has not yet ruled on whether the Vermont Constitution requires officers to knock and announce before serving a warrant. But, two Vermont district court opinions have suggested that such a requirement exists. Shortly before the Hudson decision, Judge Dennis Pearson suppressed all evidence from a search because police failed to wait more than a few seconds after knocking before forcing their way into the home. [The case is State v. Vespo, Docket No. 97-3-05 (March 22, 2006); see a case blurb here].

A few months later, after the Hudson decision, Judge Robert Bent authored a well-publicized ruling in State v. Sheltra, Docket No. 96-12-05 (July 7, 2006), determining that Vermont’s Constitution prohibits the use of evidence obtained by police after an unreasonable no-knock entry. Siding with the Hudson dissent, Judge Bent wrote that the “introduction of such evidence at trial eviscerates our most sacred rights, impinges on individual privacy, perverts our judicial process, distorts any notion of fairness and encourages official misconduct.”

While federal authorities can use such evidence in federal court, Vermont law enforcement is certainly on shakier ground in state court if they attempt an unreasonable no-knock search. The Vermont League of Cities and Towns – which provides liability insurance for the departments within most Vermont municipalities, including police departments – warned as much in a 2006 memo. Still, the local district court decisions cited above are not legally binding on other Vermont judges and do not impact the ability of federal authorities to execute no-knock warrants in Vermont.

While the state courts remain an available avenue to challenge locally initiated no-knock searches, policy reform and public oversight may be the best mechanisms to ensure that no-knock warrants are only executed when absolutely necessary.

Despite other high profile SWAT-style drug raids in Vermont during the last couple of years, Vermont has not yet seen a great increase in the use of no-knock raids. But, the recent tragedy in Burlington shows the risks of their use.

Although many in Vermont communities are suffering from addiction and dealers are capitalizing on this growing market, federal and Vermont law enforcement should learn from the innocent lives unnecessarily lost elsewhere. No-knock searches raise the likelihood that our friends, neighbors, and communities will become collateral damage of the drug war.

Tactics such as no-knock searches should only be used as a last resort when other options to effectuate a search or apprehend a suspect are not possible or have been exhausted -- and where law enforcement officers can ensure that innocent bystanders will not be put at risk.